Airshows celebrate freedom.  Families gather thrilled by flying acrobats sharing precise daring feats.  We applaud excellence and courage and are in awe of the pilots for the risks they take.  We put them on pedestals marveling at their bravery and their moment to moment choices.

A young American pilot, Melissa Pemberton, just 31 years old, participating in airshows since she was 19 talked about becoming one with her airplane to dazzle us with with dramatic sky loops that pull our attention away from smart phones for an afternoon.  She spoke of being so totally present in the moment, I wondered if she was Buddhist as I have heard Tibetan monks speak in the same way.

Another American pilot, Gary Ward from Augusta, Georgia challenged our ideas of what an airplane can do when it appeared that he changed his acrobatic plane into a helicopter with the way he stepped it down to land on the beautiful runway in the Mexican jungle on the island of Cozumel.  When asked later about the move, he answered as if it were no big deal, probably owing to the hours and hours of practice necessary for any master to make things look so simple and easy.

Guatemalan pilot Mario Mena thrilled us with both high and low flying acrobatics.  Back on the ground he graced us with a beautiful victory smile as he prepared to go before the appreciative crowd in the celebratory drive down the runway after the flight.  An hour later, things changed.

Mario’s flying partner Juan Miguel Garcia Salas also from Guatemala seemed to take extra time on the runway before he took off.  Was he studying his notes as he prepared to dazzle us? Was he building anticipation?  Getting centered? Did he doubt something? We don’t know and never will.

Our expectations mounted until he finally allowed the show smoke to engulf his orange and yellow plane and released the brake.  Cruising down the runway, he made a most dramatic and impressive takeoff.  At 90 degrees from the runway into the air surrounded by the theatrical smoke, the artistry was phenomenal. Three minutes later, however, he was dead.

His plane crashed in the jungle next to the runway. No smoke, no fire… just a loud thud.  Police, firemen, ambulances rushed to the scene in seconds.  They valiantly chopped into the jungle with axes and machetes but it was too late for Juan Miguel.  It appeared that the impact killed him instantly.

Sad and yet… this young man seemed so happy on the last day of his life.  An hour earlier he was congratulating his flying compadre, Mario, on a job well done, talking with fellow pilots and enjoying the gorgeous Cozumel sunshine and ocean breezes.  And he was doing what he loved.  It looks like Death might have just surprised him. 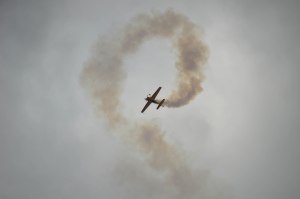 Copyright 2016. Donna Marie Carey.  All rights reserved. This may be shared electronically as long as all information and photos as well as author and web page information is kept intact.  http://www.donnamariecarey.com.